Industrial Robot: An Industrial robot is defined by ISO as an automatically controlled, reprogrammable, multipurpose manipulator programmable in three or more axes. The field of robotics may be more practically defined as the study, design and use of robot systems for manufacturing (a top-level definition relying on the prior definition of robot). Typical applications of robots include welding, painting, assembly, pick and place (such as packaging, palletizingand SMT), product inspection, and testing; all accomplished with high endurance, speed, and precision. 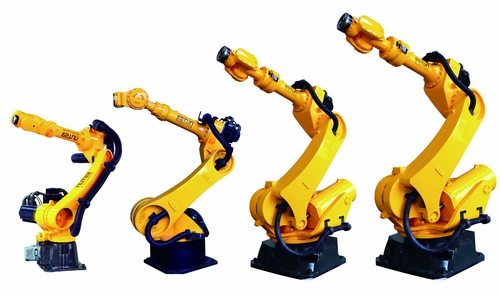 The earliest known industrial robot, conforming to the ISO definition was completed by "Bill" Griffith P. Taylor in 1937 and published in Meccano Magazine, March 1938. The crane-like device was built almost entirely using Meccano parts, and powered by a single electric motor. Five axes of movement were possible, including grab and grab rotation. Automation was achieved using punched paper tape to energise solenoids, which would facilitate the movement of the crane's control levers. The robot could stack wooden blocks in pre-programmed patterns. The number of motor revolutions required for each desired movement was first plotted on graph paper. This information was then transferred to the paper tape, which was also driven by the robot's single motor. Chris Shute built a complete replica of the robot in 1997. George Devol applied for the first robotics patents in 1954 (granted in 1961). The first company to produce a robot was Unimation, founded by Devol and Joseph F. Engelberger in 1956. Unimation robots were also called programmable transfer machines since their main use at first was to transfer objects from one point to another, less than a dozen feet or so apart. They used hydraulic actuators and were programmed in joint coordinates, i.e. the angles of the various joints were stored during a teaching phase and replayed in operation. They were accurate to within 1/10,000 of an inch (note: although accuracy is not an appropriate measure for robots, usually evaluated in terms of repeatability - see later). Unimation later licensed their technology to Kawasaki Heavy Industries and GKN, manufacturing Unimates in Japan and England respectively. For some time Unimation's only competitor was Cincinnati Milacron Inc. of Ohio. This changed radically in the late 1970s when several big Japanese conglomerates began producing similar industrial robots. 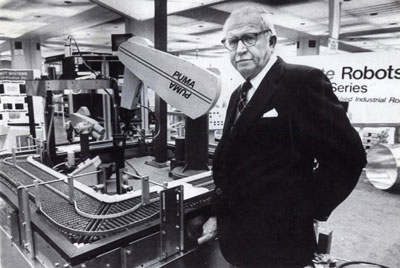 In 1969 Victor Scheinman at Stanford University invented the Stanford arm, an all-electric, 6-axis articulated robot designed to permit an arm solution. This allowed it accurately to follow arbitrary paths in space and widened the potential use of the robot to more sophisticated applications such as assembly and welding. Scheinman then designed a second arm for the MIT AI Lab, called the "MIT arm." Scheinman, after receiving a fellowship from Unimation to develop his designs, sold those designs to Unimation who further developed them with support from General Motors and later marketed it as the Programmable Universal Machine for Assembly (PUMA). Industrial robotics took off quite quickly in Europe, with both ABB Robotics and KUKA Robotics bringing robots to the market in 1973. ABB Robotics (formerly ASEA) introduced IRB 6, among the world's first commercially available all electric micro-processor controlled robot. The first two IRB 6 robots were sold to Magnusson in Sweden for grinding and polishing pipe bends and were installed in production in January 1974. Also in 1973 KUKA Robotics built its first robot, known as FAMULUS, also one of the first articulated robots to have six electromechanically driven axes. Interest in robotics increased in the late 1970s and many US companies entered the field, including large firms like General Electric, and General Motors (which formed joint venture FANUC Robotics with FANUC LTD of Japan). U.S. startup companies included Automatix and Adept Technology, Inc. At the height of the robot boom in 1984, Unimation was acquired by Westinghouse Electric Corporation for 107 million U.S. dollars. Westinghouse sold Unimation to Stäubli Faverges SCA of France in 1988, which is still making articulated robots for general industrial and cleanroom applications and even bought the robotic division of Bosch in late 2004. Only a few non-Japanese companies ultimately managed to survive in this market, the major ones being: Adept Technology, Stäubli, the Swedish-Swiss company ABB Asea Brown Boveri, the German company KUKA Robotics and the Italian company Comau.