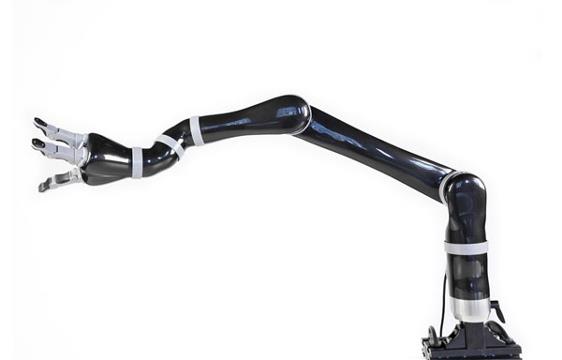 Jaco Robot is a smart robotic arm that is a light-weight, technical assistance robot which was designed to compensate for the loss of arm movements. It is composed of six interlinked segments, the last of which is a three-fingered hand. Through the controller, the user can move the robot’s hand in three-dimensional space and grasp or release objects with the hand, using either two or three fingers. An adapted controller is used to switch between modes of control. The robotic arm JACO can be fixed to a powered wheelchair, a workstation and toa table. JACO fits entirely under the armrest of a wheelchair and does not extend the width of the chair. The JACO arm is able to increase  the performance of activities of daily living in individuals with physical disabilities, without adding barriers to wheelchair mobility.

The actuators use DC brushless motors with Harmonic Drive technology and are equipped with a set of sensors such as encoders, torque sensor, current sensor, temperature sensor and accelerometers. They can be controlled in position or torque and can perform multiple rotations thanks to an integrated slip ring technology. The actuators are independent, interoperable and can be used to build custom robots or system.

The gripper must be able to pick objects of daily living, both varying in shape and size. Underactuated grippers (Birglen et al., 2008), with one motor per finger, are designed to simplify the controller, to reduce costs and to automatically adapt to the shape of different objects. The grippers include a 2-finger and a 3-fingers hand.

Different interfaces can be used to control the robots such as a Software Development Kit (SDK) (including a high-level API, a low-level API and a Development center), a ROS package and a Joystick. The joystick enables the user to quickly operate the robot. It has a three degrees of freedom stick and 7 buttons. The basic mapping allows performing translations, rotations and moving the fingers. 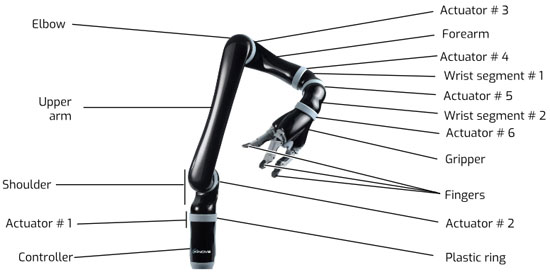