Scara Robot: In 1981, Sankyo Seiki, Pentel and NEC presented a completely new concept for assembly robots. The robot was developed under the guidance of Hiroshi Makino, a professor at the University of Yamanashi. The robot was called Selective Compliance Assembly Robot Arm, SCARA. Its arm was rigid in the Z-axis and pliable in the XY-axes, which allowed it to adapt to holes in the XY-axes. By virtue of the SCARA’s parallel-axis joint layout, the arm is slightly compliant in the X-Y direction but rigid in the ‘Z’ direction, hence the term: Selective Compliant. This is advantageous for many types of assembly operations, i.e., inserting a round pin in a round hole without binding.

The second attribute of the SCARA is the jointed two-link arm layout similar to our human arms, hence the often-used term, Articulated. This feature allows the arm to extend into confined areas and then retract or “fold up” out of the way. This is advantageous for transferring parts from one cell to another or for loading/ unloading process stations that are enclosed.

SCARA’s are generally faster and cleaner than comparable Cartesian robot systems. Their single pedestal mount requires a small footprint and provides an easy, unhindered form of mounting. On the other hand, SCARA’s can be more expensive than comparable Cartesian systems and the controlling software requires inverse kinematics for linear interpolated moves. This software typically comes with the SCARA though and is usually transparent to the end-user.

Scara Robot: How it Works 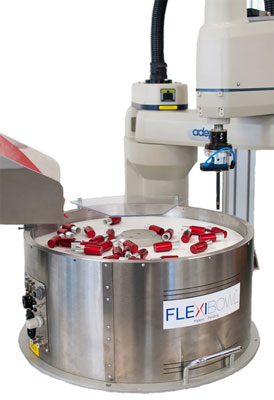 The SCARA robot is a manipulator with four degrees of freedom. This type of robot has been developed to improve the speed and repeatability ON PICK&PLACE TASKS from one location to another or to speed and improve the steps involved in assembly. This is why it is often used with FlexiBowl®. Morover these robots are used in the automotive field, as well as electronic, and other industrial fields where manufacturers needs to feed bulk components of all sizes; in these areas FlexiBowl® is performing so good that is replacing others parts feeders. SCARA kinematics makes this robot particularly suitable to perform assembly tasks with tight tolerances, such as putting a shaft into a hole, thanks to the capability to adjust the movement on the horizontal plane, while at the same time maintaining high rigidity on the vertical direction. The mechanics of the SCARA arm is generally quite strong and can withstand without problems unexpected stress and collisions. In a SCARA robot junctions of the shoulder and elbow are vertical and the wrist moves vertically. This  configuration minimizes the effects of gravity on the robot by downloading them to the ground and allowing the use of this machine in cases of strong pressures as in vertical perforations.