Soft Elastic Robots: Harvard researchers have blended organic chemistry, soft materials science, and robotics to create a soft robot inspired by animals like squid and worms. The soft robot has no hard internal skeleton and uses no sensors. It crawls by using a network of valves and tubes that guide air into and out of four elastomer leg compartments called ‘pneu-nets’ and a body section. The pneumatically actuated robot can navigate obstacles using one of several gaits–walking, crawling, and slithering–and it can deflate to pass through tiny little gaps. In an earlier experiment, Whitesides and his colleagues created a starfish-shaped gripper using elastic polymers that inflate like balloons for actuation. The soft gripper was able to perform delicate tasks such as picking up eggs. Soft robots can’t yet handle heavy loads or conduct electricity, but the researchers believe that eventually they may be able to by incorporating the right materials. What is a Soft Robot?

Soft robots are primarily composed of easily deformable matter such as fluids, gels, and elastomers that enable compliance matching with the environing materials. Compliance matching is the principle that materials that come into contact with each other should share similar mechanical rigidity in order to evenly distribute internal load and minimize interfacial stress concentrations. However, this principle does not apply to rigid robots (E=109Pa) interacting with soft materials (E=102-106Pa), causing damage or mechanical immobilization (where E is the Young’s Modulus, which gives a measure of the stiffness of a solid material). These types of interactions with soft materials are widely spread, as for instance with natural skin, muscle tissue, delicate internal organs, but also organisms, artificial replications of biological functionalities, etc… Due to this dramatic mismatch in mechanical compliance, it is easy to conclude that rigid robots are not adapted and even dangerous for intimate human interaction. Therefore, there is a need of robots that match the elastic and rheological properties of materials and organisms found in nature, and this is where soft robots could bring the solution. Designing soft robots calls for completely new models in their mechanics, power supply and control. However, rethinking materials, design strategies and fabrication techniques should open up new areas of soft robotics in macro and micro length scales in a lot of fields (healthcare, human assistance, field exploration…) This review addresses the different types of actuations that exist, as well as the principal method of fabrication of these soft robots, before delving deeper into their applications.

How to Fabricate and Actuate a Soft Robot?

Pneumatic Networks actuators (PneuNets) are the most common soft robots, and are made up of a soft material, an elastomer, within which pressurized fluids can navigate through a series of channels and chambers. When these chambers are pressurized, the entrapped fluid generates stress from inside the material, causing the material to strain, to deform, and those enabling the motion of the actuator. The nature of this motion is controlled by modifying the geometry of the embedded chambers and the material properties of their walls. Generally, each segment of a fluidic elastomer robot bends, and this bending is due to material strain. If a robot is composed of a single homogenous elastomer, most expansion will occur on the thinnest structures, and the motion of the robot will thus depend on the geometry of the microfluidic circuit. However, materials with different elastic behaviors can also be used to allow further control over actuator behavior.

For example, this figure illustrates how to obtain a unidirectional bending. This actuator is composed of two layers, one extensible and the other not, but both have the same size, L0. When pressurized, the top surface will become strained so that its new length will be L0+ΔL . Meanwhile, the bottom surface will remain unextended, causing the bending of the actuator. Bending is the basic, primitive motion of the fluidic elastomer robot. Usually, softrobots are composed of two parts like in this example, where the more rigid layer is called « constraint layer », and the layer containing the channels and chambers is called « outer layer ». However, more complex actuators possessing more pieces also exist. This kind of softrobots exhibiting two materials, are usually made up of two silicone elastomers: the Ecoflex and the polydimethylsiloxane (PDMS). This two elastomers bond well to each other, present a different but well-suited rigidity, are easy to mold and relatively inexpensive. PDMS has a Shore A hardness* of 50, while Ecoflex has a hardness below the Shore A scale (it fractures only above a maximum strain of 900%). As a result, PDMS is ideally suited for the constraint layer, as it has a limited range of deformation, while Ecoflex is more flexible and therefore more suitable to be used as the outer layer. Instead of using elastomers with different rigidity, other techniques also allow to control the motion of the actuators. The actuator can be made of one single elastomer, but the constraint layer may contain fiber, paper, or a plastic film to produce the inextensibility property required for actuation. Also, fiber-reinforced actuators exist, and consist of a simple PneuNet actuator wrapped with inextensible reinforcements, which enable to control their motion. Shore hardness is a durometer scale which enables to measure the hardness of materials, typically used for polymers, elastomers and rubbers. The A scale is for softer plastics, while the D scale is for harder ones. To create soft robots, the most used manufacturing process consists in soft lithographic molding, which relies on casting elastomer in molds obtained by soft lithography or 3D printing. This fabrication process generally consists of three steps:

Obviously, some soft robots are more complex and need more steps for their creation, but the process of fabrication stays the same, broadly speaking. 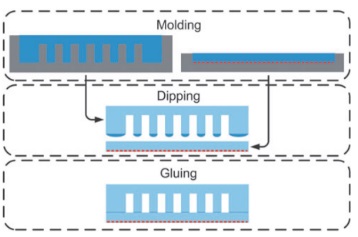