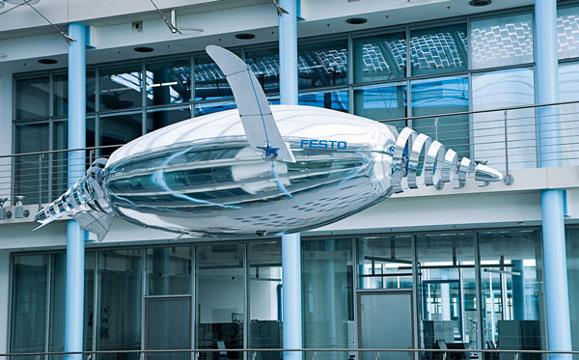 AirPenguin Robot which fly as a group, accurately simulate the movements of their natural counterparts: thanks to their 3-D structure with Fin Ray Effect at the front and back, they glide through the water just like real penguins. Their passively twisting flippers enable the penguins to fly both forwards and backwards. The buoyancy of the ultra-light AirPenguins is assured by way of a helium-filled ballonet. Each pair of spatially opposed carbon fibre rods is connected via bowden wires and a double pulley, and can be extended and retracted in contrary motion by means of an actuator. This gives rise to rotation free of play both at the tip of the AirPenguin’s nose and at the end of its tail. By superimposing two perpen dicular planes of rotation, any desired spatial orientation can be realised. A strut to which the two wings are attached passes through the helium-filled ballonett. This new type of wing design can produce either forward or reverse thrust. Each wing is controlled by two actuators: a flapping actuator for the up-and-down movement of the wings, and a further unit that displaces the wing strut to alter the pressure point of the wings. There is also a central rotational actuator for the two flapping wings that directs their thrust upwards or downwards, thus making the AirPenguins rise or descend. All three actuators are proportionally controlled. This makes for continuously variable control of the flapping frequency, forward and reverse motion, and ascent and descent.