Cartesian and Gantry Robots: A cartesian coordinate robot (also called linear robot) is an industrial robot whose three principal axes of control are linear (i.e. they move in a straight line rather than rotate) and are at right angles to each other.The three sliding joints correspond to moving the wrist up-down,in-out,back-forth. Among other advantages, this mechanical arrangement simplifies the Robot control arm solution. 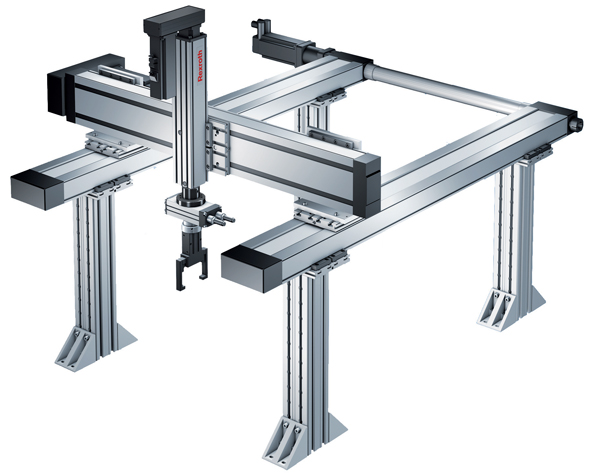 Cartesian coordinate robots with the horizontal member supported at both ends are sometimes called Gantry Robots. They are often quite large.Industrial gantry type cartesian robot is applied on CNC lathes production line for continuous parts loading and unloading. It performs 3-axis (X, Y, and Z) linear movement in high speed performance to save numbers of operators. In addition, the robot is able to handle heavy loads of pick and place parts feeding procedure with high positioning accuracy. Some special requirements might be low noise and customized supply table, which is made according to number of storage. Since handling is usually above the CNC, overhead gantry is also a common term to describe this type of robotic arm. Overhead design is suitable for most automation system. 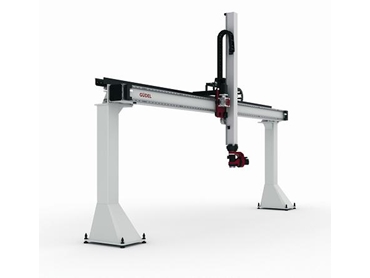 A popular application for this type of robot is a computer numerical control machine (CNC machine). The simplest application is used in milling and drawing machines where a pen or router translates across an x-y plane while a tool is raised and lowered onto a surface to create a precise design.

Cartesian robots’ total cost of ownership has decreased 25% over the last five years due to pre-parameterized control packages, online design tools, and economies of scale. So now they are viable options for small to midsize manufacturers looking to automate storage-and-retrieval, pick-and-place, liquid-dispensing, packaging, and auxiliary machine-tool operations.