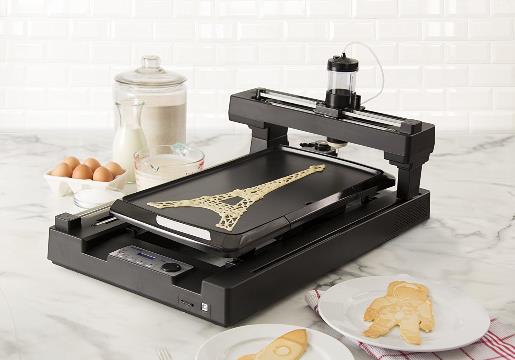 Two years after building a DIY LEGO Pancake Bot, which involved a ketchup bottle and a built-in griddle to sizzle dispensed batter, Miguel Valenzuela, the Norway-based U.S. maker behind the earlier homebrew project, is back crowdfunding a smarter batter dispenser that 3D prints sketches in pancake batter and cooks them in the order you drew the lines — resulting in edible pancake art. The new batter bot is currently in prototype form, with Valenzuela raising money on Kickstarter to get the machine to market. There’s no LEGO in the planned commercial design. He had moved on to an acrylic design, in any case, and has also now partnered with New York based product development company StoreBound to — in his words — “bring a refined version of the product to market by mid 2015”. He’s hoping to ship to backers by July. This version of the Pancake Bot will include Mac and Windows software that lets users load designs into the bot, via SD card, after retracing lines in the order they want them printed. The first lines that get laid down by the bot will spend longer on the griddle and thus come up darker in the design. The machine users “a combination of compressed air and a vacuum” to control the batter’s descent.