It is not easy to group Flying Robots into sub groups. As Flying robots use various kinds of technologies we will group these robots by their flying system. 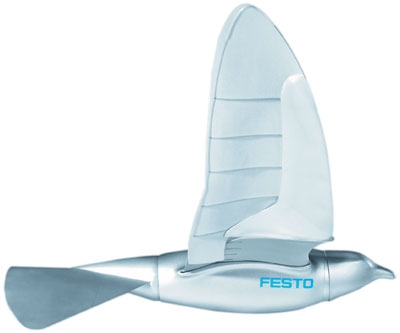 AirPenguin – Autonomous Flying Robot
AirPenguin is an agile and maneuverable autonomous flying object that comprises a helium filled balloon and has a pyramid-shaped flexible structure of four carbon fiber rods at each end.

Not only is this but the AirPenguins also flaps wings as the birds do. This is made possible via new type of wing span that can produce forward or reverse thrust and 3D Fin Ray structure. Wings are controlled by two actuators wherein flapping actuator helps up and down movements and a further unit that displaces the wing struts to alter the pressure point of the wings.
Also, there is a rotational actuator for the two flapping wings, directing thrust upwards or downwards, thus making the AirPenguins rise or descend accordingly.

Air Ray
Air_ray, modelled on the manta ray, is a remote-controlled hybrid construction consisting of a helium-filled ballonet and a beating wing drive. Its lightweight design enables it to “swim” in the sea of air using the lift from the helium in a similar way to the manta ray in water.

Propulsion is achieved by a beating wing drive. The servo drive-controlled wing, which can move up and down, utilises the Fin Ray Effect® and is based on alternate pulling and pushing flanks connected via frames. When pressure is exerted on one edge, the geometrical structure automatically curves against the direction of the influencing force. A servo drive pulls the two flanks alternately in longitudinal direction, thus moving the wing up and down. 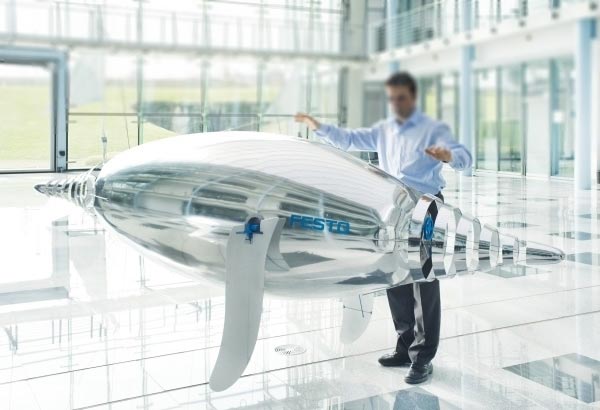 Quadrotor, Quadcopter,Quadrocopter
A quadrotor, also called a quadrotor helicopter or quadcopter, is a multicopter that is lifted and propelled by four rotors. Quadrotors are classified as rotorcraft, as opposed to fixed-wing aircraft, because their lift is generated by a set of revolving narrow-chord airfoils. Unlike most helicopters, quadrotors generally use symmetrically pitched blades; these can be adjusted as a group, a property known as ‘collective’, but not individually based upon the blade’s position in the rotor disc, which is called ‘cyclic’ (see helicopter). Control of vehicle motion is achieved by altering the pitch and/or rotation rate of one or more rotor discs, thereby changing its torque load and thrust/lift characteristics.

A team at the Swiss Institute of Technology in Zurich has developed intelligent robots that can dock with each other and fly in a swarm.
The Distributed Flight Array robots locate each other using infrared and then lock together magnetically to create a sophisticated multi-propeller flight system.
Each hexagonal quadrocoptor robot, built of low-density expanded polypropylene (EPP) foam, has its own fixed-pitch mini-propeller and sensors. They are powered by a 50W brushless DC motor with an off-the-shelf electronic speed controller which produces more than three Newtons of thrust.

Embedded in the chassis is a lithium-ion polymer battery that is capable of powering both the motors and the electronics for up to five minutes of flight.

The units can take off and land vertically and fly independently, but erratically. Small wheels let them crawl around on the ground to locate each other.
Once they’ve hooked up, though, they become capable of more efficient flight, communicating information from their altitude sensors via infrared to make flight more even by controlling roll and pitch.
If one fails, the others can compensate. And when they land, the robots can simply detach from each other and crawl away.
The developers are continuing to work on the system, with plans for larger-scale driving and flying experiments. “The goal is to have many modules assemble at random, fly to a predetermined altitude, hover, break apart, fall back down, and repeat the cycle,” says the team.

Plenty of robots can fly, but none can fly like a real bird. That is, until Markus Fischer and his team of engineers at the German technology company, Festo, developed SmartBird, an avian robot that can take off and fly through the air by simply flapping its wings.

SmartBird was inspired by the herring gull, Larus argentatus. It is a bit larger than this gull species, with a two-metre wingspan and a carbon-fiber “skeleton” that weighs 450 grams. Like live birds, SmartBird’s “torso” can flex, providing directional control and is radio-controlled and monitored from afar.

As you would expect, the wings move up and down, generating lift, but the wings also twist and flex in flight like those of a real bird. This torsion keeps the wing’s leading edge pointed upwards during the upward stroke, so that the wing adopts a positive angle of attack. This smooth sequence of wing movements generates thrust.

The SMAVNET project aims at developing swarms of flying robots that can be deployed in disaster areas to rapidly create communication networks for rescuers. Flying robots are interesting for such applications because they are fast, can easily overcome difficult terrain, and benefit from line-of-sight communication.

From a software perspective, controllers allow flying robots to work together. For swarming, robots react to wireless communication with neighboring robots or rescuers (communication-based behaviors). Using communication as a sensor is interesting because most flying robots are generally equipped with off-the-shelf radio modules that are low-cost, light-weight and relatively long-range. Furthermore, this strategy alleviates the need for position which is required for all existing aerial swarm algorithms and typically requires using sensors that depend on the environment (GPS, cameras) or are expensive and heavy (lasers, radars).