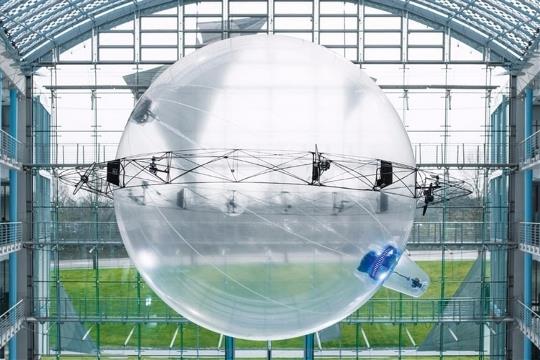 Freemotion Handling Robot, The handling system consists of an ultra-light carbon ring with eight adaptive propellers. In the middle of the ring sits a rotatable helium ball with an integrated gripping element. As a result, both man and machine can interact with each other easily and safely, opening up entirely new possibilities for the workplace of the future. In this future, people could be supported by the spheres, using them as a flying assistance system – for example, when working at giddying heights or in hard-to-access areas. For this purpose, the engineers made particular use of two existing developments from the Bionic Learning Network: the gripping mechanism on the FreeMotionHandling is modelled on the universally applicable FlexShapeGripper, whose working principle is derived from the tongue of a chameleon. Its elastic gripper can wrap itself around the item being gripped in a flexible and form-fitting manner and even collect more than one object in a single procedure. The flying helium ball itself is a further development of the eMotionSpheres. The flying helium ball itself is a further development of the eMotionSpheres. For its drive concept, for the first time Festo designed adaptive propellers, which – thanks to their flexible membrane – can provide the same thrust in both directions of rotation. The knowledge gained from the work on the BionicOpter went into the design of the propellers. The developers took the wing principle of the artificial dragonfly a step further and transferred it to the drives, which are now also used on the FreeMotionHandling.