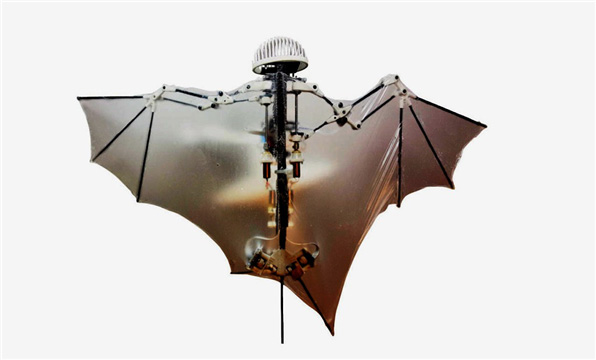 BatBot Robot: "Bat flight," said researcher Soon-Jo Chung of Caltech and the Jet Propulsion Laboratory during a press conference, "is the holy grail of aerial robotics."

This is because bat flight is complex. The animal uses over 40 active and passive joints on its wings to fly, as well as the flexible membrane that stretches over its phalanges. Bat Bot doesn't have quite so many joints, but its advanced construction makes one of the most flexible autonomous flying robots to date. Other biomimetic robots are often clunky, or limited in their movement, but the 93-gram, 47-centimetre-wingspan Bat Bot is able to replicate bat-like flight patterns. There were several ways the team achieved this. One of the major ones is that the robot can move its wings independently of one another, using asymmetrical motion to be able to make sharp turns and fly a twisted path. They also pared the number of joints in the robot down to just nine, five active and four passive, compared to the over 40 of real bats, by identifying which joints were the most important for the wing stroke. This is because copying the bat's anatomy exactly results in a robot that is too heavy with joints to fly. The bat's shoulder, elbow, wrist bend and side-to-side tail movement were determined to be the most important joints for flight. The skeleton was then made from carbon fibre bones and 3D-printed ball-and-socket joints, which was covered by a soft, lightweight, durable silicone membrane just 56 microns thick. This membrane allows Bat Bot to change the shape of the wing structure in flight without compromising its smooth, aerodynamic surface. It also generates lift as the wings flap, conserving the power supplied by micromotors on the robot's back.