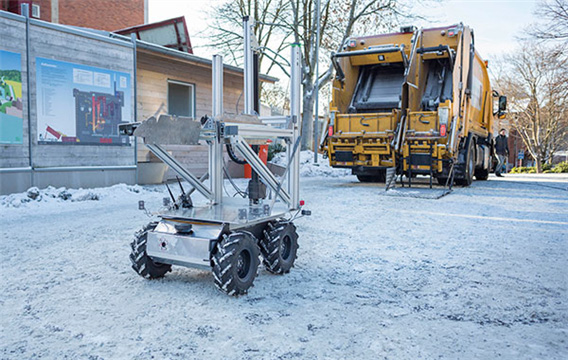 A drone and a little robot on four wheels are teaming up to become automated garbagemen. The ROAR Project, headed by Volvo, is studying how to automate waste management. The system it's come up with is ROARY, a little wheeled garbageman whose job it is to grab refuse bins and bring them to the garbage truck. But ROARY doesn't find the bin itself. That's up to a drone hovering just above, whose job it is to recognize not just garbage bins, but any obstacles, and relay their positions to ROARY below. Then, ROARY's own eyes finally kick in, helping guide it to the garbage bin and hoist it up, delivering it to the truck.

Once the bin is at the truck, the truck itself has a few little AI systems of its own. It must recognize that the bin is safe to lift, using on-board cameras which can also detect people and other objects in the vicinity and make emergency stops. The project is in its early stages, and what you see above is the first full demonstration. Many changes will happen between now and then. But it's not hard to imagine that, some day, ROARY and its ilk will clean up city parks, collect municipal garbage, or handle other similar lifting tasks.