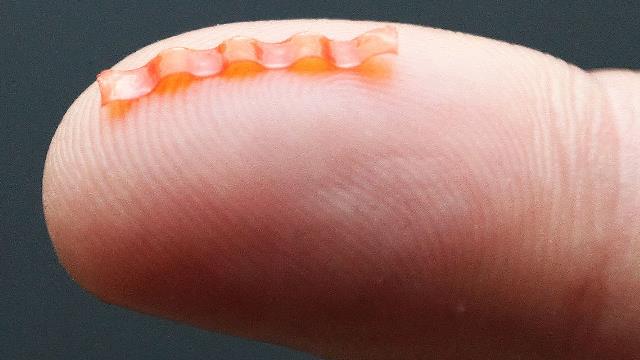 Inspired by the rippling locomotion of caterpillars, physics researchers at the University of Warsaw created the robot that at first glance appears to be nothing more than a thin transparent strip. But its body is made from light sensitive elastomer aligned in a molecular pattern, the secret to its creepy-crawly movement. Exposure to light causes its body to contract in a wave-like ripple, propelling its body forward. By controlling the lighting conditions, the researchers were able to get the robot to perform different actions. The caterpillar robot can crawl up slopes, through tiny crevices, and can carry loads up to ten times its own mass. Caterpillars have inspired robot designs before, but the challenge has been building them at natural scale because available actuators have typically been too large, the researchers say. "Designing soft robots calls for a completely new paradigm in their mechanics, power supply and control. We are only beginning to learn from nature and shift our design approaches towards these that emerged in natural evolution," Piotr Wasylczyk, head of the Photonic Nanostructure Facility at the University of Warsaw.