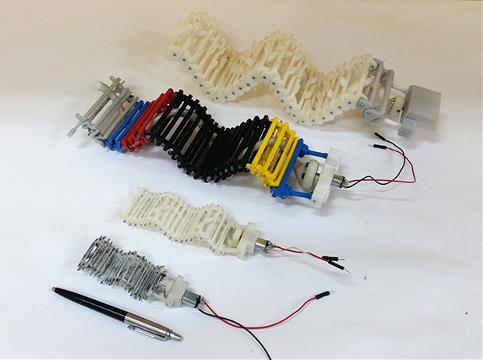 The first SAW (Single Actuator Wave-like Robot) that produces a pure wave motion using a single motor has been developed at Ben-Gurion University of the Negev. The SAW robot is designed for medical applications, maintenance, search and rescue and security scenarios. The unique robot was developed by Dr. David Zarrouk, a senior lecturer in the Mechanical Engineering Department and a member of the ABC Robotics Initiative. He is head of the Bio-inspired and Medical Robotics Lab. He and two Masters students study the movement of the wave like robot: Ilanit Waksman, who researches swimming in viscous liquids, a movement that mimics small biological organisms; Nir Dagani, who researches movement on flexible and slippery surfaces in an effort to model the locomotion of robots within the human body. The robot derives its inspiration from the way snakes move in nature, although its wave movement is perpendicular. The wave movement enables the robot to crawl across different surfaces, climb and swim, while the wheels are for steering. The robot’s top speed is 57 centimeters per second, five times faster than any similar robot. SAW can climb over obstacles or crawl through difficult surfaces like sand, grass and gravel. The robot can also climb through tunnels at a rate of 8 cm per second touching both sides. Moreover, a waterproof version can swim at 6 cm a second.