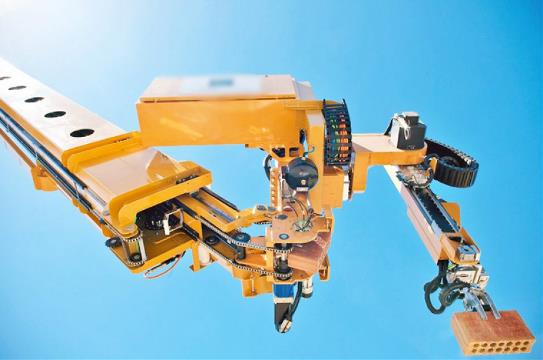 As robots get smarter, cheaper and more versatile, they're taking on a growing number of challenges – and bricklaying can now be added to the list. Engineers in Perth, Australia, have created a fully working house-building machine that can create the brick framework of a property in just two days, working about 20 times faster than a human bricklayer. Named Hadrian (after Hadrian's Wall in the UK), the robot has a top laying speed of 1,000 bricks per hour, which works out as the equivalent of about 150 homes a year. Of course there's no need for the machine to sleep, eat or take tea breaks either, giving it another advantage over manual laborers. At the heart of Hadrian is a 28 m (92 ft) articulated telescopic boom. Though mounted on an excavator in the photo below, the finished version will sit on a truck, allowing it easier movement from place to place. The robot brick-layer uses information fed from a 3D CAD representation of the home for brick placement, with mortar or adhesive delivered under pressure to the head of the boom.