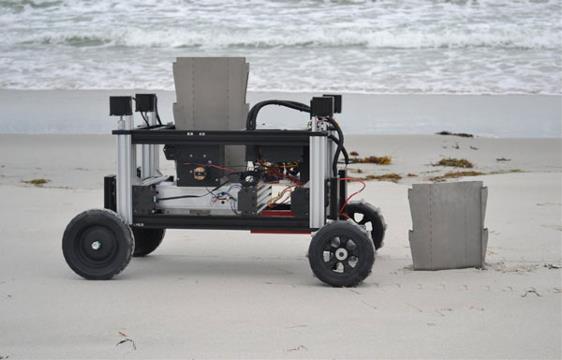 Romu Robot is a smart four wheeled robot that uses its own weight to drive sheet piles into the ground. According to Wyss, this is made possible by each of its four wheels being coupled to a separate linear actuator, which also allows it to adapt to uneven terrain and ensure that piles are driven vertically. From a raised position, Romu grips a sheet pile and then lowers its chassis, pressing the pile into the soil with the help of an onboard vibratory hammer. By gripping the pile again at a higher position and repeating this process, the robot can drive a pile much taller than its own range of vertical motion. After driving a pile to sufficient depth, Romu advances and installs the next pile that interlocks with the previous one and forms a continuous wall.