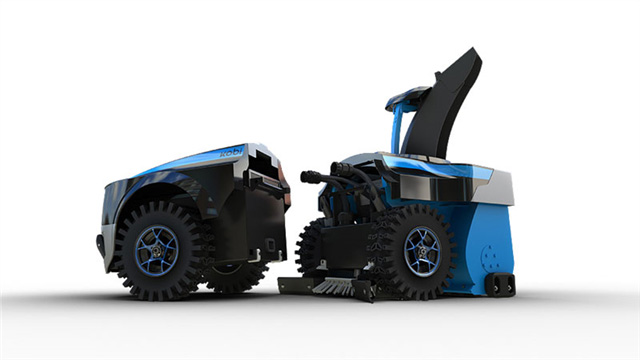 The average American spends nearly 70 hours a year on lawn and garden care. The Kobi Company wants to give you all that time back. The New York-based startup unanimously won Pitchfire at RoboBusiness 2016 with its Kobi 3-in-1, autonomous robot landscaper that mows your lawn, removes your leaves, and snow blows your driveway. Co-founder Steve Waelbers says Kobi has been tested in the company’s lab, and that 10 beta versions of the robot will be working hard in yards by the end of 2016. They’ll then use that feedback to get into full production. Here’s how Kobi works. The base unit stays the same and you swap out attachments based on whether you need Kobi to mow the lawn, mulch leaves, or snow blow your driveway. Waelbers says you teach Kobi where to blow the snow and dump the leaves using the app. Kobi can throw the snow up to 40 feet, depending on the condition of the snow. Waelbers says no tedious boundary wires are needed to keep Kobi from veering out of your yard or driveway. All you need to do is use the companion app to drive Kobi around the yard or driveway so it can learn the perimeter of those spaces and where any fixed obstacles are located. Kobi uses GPS and a suite of sensors to achieve inch-level positioning accuracy. Kobi also features WiFi, Bluetooth and mobile data connectivity.