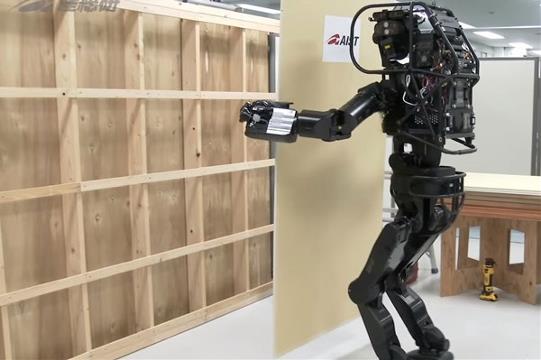 HRP-5P Robot is a prototype humanoid construction robot that aims at replacing heavy duty human labor. created as a response to the country’s labor shortage due to its aging population and declining birthrate, the robot can autonomously carry out various building tasks, such as picking up a plaster board and screwing it onto the wall. HRP-5P comes with a height of 182 cm and weight of 101 kg, and with 2 degrees of freedom of the neck, 3 degrees of freedom of the waist, 8 degrees of each arm, 6 degrees of each leg and 2 degrees of each hand, totaling 37 degrees of freedom – a maximum frequency in the HRP series. AIST has created the robot with improved intelligence, equipping it with object recognition technology and environment measurement abilities. its robust body is aimed at practical application in the construction of buildings and large-sized structures such as aircrafts and ships, while it allows it to handle big-scale objects such as gypsum boards (1820 × 910 × 10 mm, about 11 kg) and plywood panels (1800 × 900 × 12 mm, about 13 kg) with both arms.