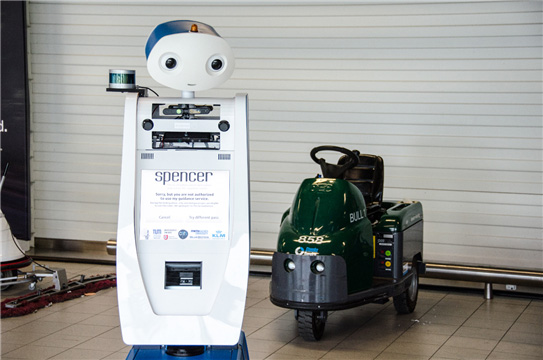 After three years of building and programming, the first tests using guide robot Spencer were successfully conducted at Schiphol airport this month. The test phase was completed last week. Spencer, developed in cooperation with the University of Twente, has guided KLM passengers to the right gate at Schiphol airport for the first time. The robot has access to detailed maps of the airport and laser eyes that allow it to measure distances for example. Once Spencer has scanned passengers' boarding passes, he knows that the group is complete and to which departure gate they have to be escorted. Spencer will automatically leave and the passengers follow the robot. The robot adjusts its speed to the group, moves past obstacles and informs passengers of the remaining distance to the departure gate via a screen. Once there, he will inform them that they have reached their destination.