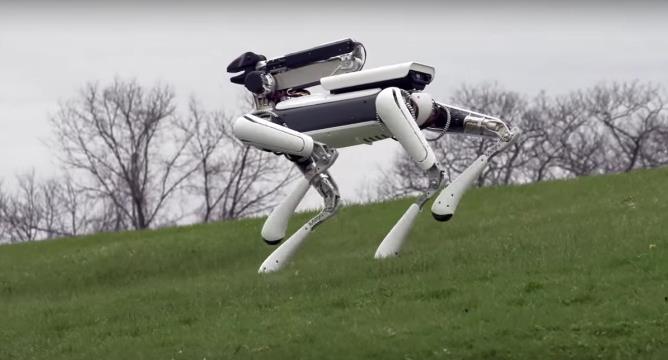 Boston Dynamics has gone from the battlefield to the home with a smaller, quieter quadruped robot that can navigate around the house and even fetch you a drink – if you can get it to let go of the can. The focus of a new video released today, the SpotMini is a more compact and streamlined version of the Spot robot unveiled in 2015 and boasts an articulated arm with a manipulator that looks like a cross between a sheep's head and an oven mitt. Along with its nimbleness, the SpotMini demonstrates its ability to use its arm to load a dishwasher and throw out garbage as well as do a strange little dance while its manipulator maintains its position in midair. The video even shows the robot bringing a human a can of soda then playing tug of war for possession of the can in a very robodog-like fashion. According to Boston Dynamics, the SpotMini weighs in at only 55 lb (25 kg) or 65 lb (29 kg) with the arm. Unlike previous Boston Dynamics robots, the SpotMini lacks hydraulics and its all-electric systems make it the quietest the company has yet produced. It runs on an internal battery for up to 90 minutes and has stereoscopic depth cameras, a solid-state gyro, and sensors that allow it to determine what position its limbs are in. Its creators say that although it can carry out many tasks autonomously, it still needs humans for high-level guidance.