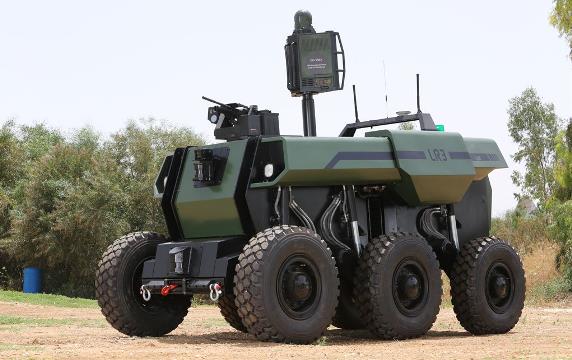 IAI is introducing the RoBattle, a new combat robot it has developed. A member of a growing family of Unmanned Ground Vehicles (UGV) that evolved from the company’s robotics center in recent years. RoBattle will make its debut at the Eurosatory exhibition in France next week. Designed for modern ground combat, RoBattle is built to operate independently or to support manned formations with the most dangerous, extreme tasks that soldiers had to do before. Performing armed scout and advance guard, ambush and attacks that ‘stimulate the area’, or penetrate deep into contested areas, including deception (acting as a decoy), RoBattle formations are also designed to gather intelligence and surveillance covertly, and assist convoy protection. The combat ready RoBattle has a vehicle gross weight of seven tons, including three tons of payload. The diesel powered 6×6 articulated vehicle can also use tracks for improved all-terrain mobility. As a combat-ready platform, RoBattle is designed to survivability to endure battle damage, provided with protection and redundancy for sensitive areas. The robot carries the ultra-light Pitbull – Remote Weapon Station (RWS) developed by General Robotics. The Pitbull weighs only 50 kg, and includes a set of sensors enabling operations in day, night and under limited visibility conditions,, providing the carrying platform advanced situational awareness and hostile fire indication, enabling the robot to respond effectively, in few seconds to threats around it, by maneuvering, deploying countermeasures or suppressive fire.