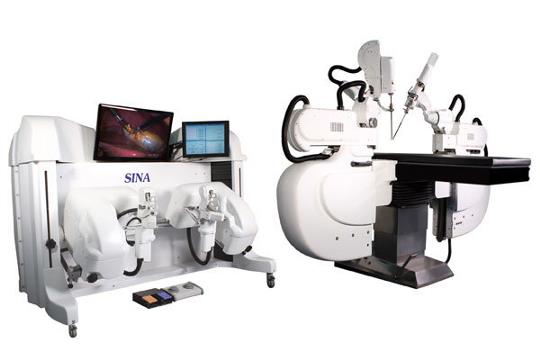 SINA Robot: SINA robot, On the sideline of the international exhibition of technology and innovation of Islamic republic of Iran, robotic surgery system SINA, which is developed collaboratively by researchers from Sharif University of Technology and Tehran University of Medical Sciences, was unveiled by vice presidency of science and technology, executive of innovation and commercialization and the head of the center for technological collaborations of the presidency. “The name of the system is borrowed from Abu-ali Sina, the renowned Iranian physician and philosopher”, Dr. Farzam Farahmand, a faculty member of Mechanical Engineering Department at Sharif University of Technology, and the principal investigator of project SINA, mentioned in his meeting with reporters. He also said that this robotic system will be a localized equivalent to da Vinci, the only functional surgical robot in the world. “The researchers are trying to start the clinical trial of the system after completing the development of the lab prototype”, he added. In explaining the functionality of this robot in performing minimally invasive surgeries, he said that the system benefits from an advanced tele-surgery station. The surgeon can carry on the surgery on a remote site using two robotic arms. In order to monitor the surgery, the system uses an endoscopic camera which enters the patient’s body through a small incision and transmits live pictures to the surgeon. “This robotic system can be used in most of the surgical operations, particularly prostate surgery, and using robotic arms with sufficient degrees of freedom, significantly reduces damage to healthy tissues, bleeding and the duration of recovery”, Dr. Farahmand added.