The Sandia National Laboratories (SNL), managed and operated by the National Technology and Engineering Solutions of Sandia (a wholly owned subsidiary of Honeywell International), is one of two major United States Department of Energy research and development national laboratories. In December 2016, it was announced that National Technology and Engineering Solutions of Sandia, under the direction of Honeywell International, will take over the management of Sandia National Laboratories starting on May 1, 2017. Their primary mission is to develop, engineer, and test the non-nuclear components of nuclear weapons. The primary campus is located on Kirtland Air Force Base in Albuquerque, New Mexico and the other is in Livermore, California, next to Lawrence Livermore National Laboratory. Sandia is a National Nuclear Security Administration laboratory. It is Sandia's mission to maintain the reliability and surety of nuclear weapon systems, conduct research and development in arms control and nonproliferation technologies, and investigate methods for the disposal of the United States' nuclear weapons program's hazardous waste. Other missions include research and development in energy and environmental programs, as well as the surety of critical national infrastructures. In addition, Sandia is home to a wide variety of research including computational biology, mathematics (through its Computer Science Research Institute), materials science, alternative energy, psychology, MEMS, and cognitive science initiatives. Sandia formerly hosted ASCI Red, one of the world's fastest supercomputers until its recent decommission, and now hosts ASCI Red Storm, originally known as Thor's Hammer. Sandia is also home to the Z Machine. The Z Machine is the largest X-ray generator in the world and is designed to test materials in conditions of extreme temperature and pressure. It is operated by Sandia National Laboratories to gather data to aid in computer modeling of nuclear weapons. 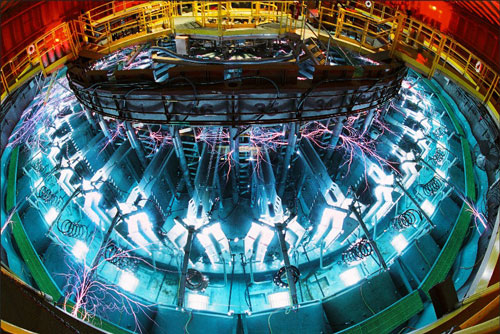