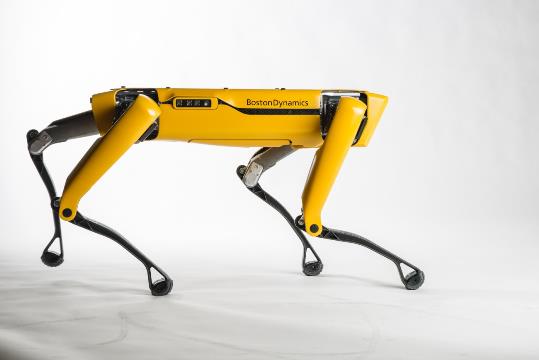 SpotMini Robot: SpotMini is a small four-legged robot that comfortably fits in an office or home. It weighs 25 kg (30 kg if you include the arm). SpotMini is all-electric and can go for about 90 minutes on a charge, depending on what it is doing.  SpotMini is the quietest robot we have built. The last time we saw SpotMini was the original reveal back in 2016, where it had a fifth limb that served as a head and neck, or an arm, depending on what the situation called for. The new model appears to skip a head altogether, but since this is just a teaser of the bot, with Boston Dynamics promising a bigger reveal later, the final design might still feature modular functionality that can be added and removed as needed.

To move around a designated space, the robot relies on an array of cameras and sensors that are mounted around the frame. There is one up front, another at the back, and two on each of its flanks. SpotMini uses the data from the cameras and its AI to avoid obstacles. Furthermore, it can navigate up and down the stairs and other irregular terrains where wheeled-robots cannot go. Together with an optional arm, which folds on top and humorously looks like its head, it could hold and keep an object steady while the body moves around, just like a stabilizer for a camera.