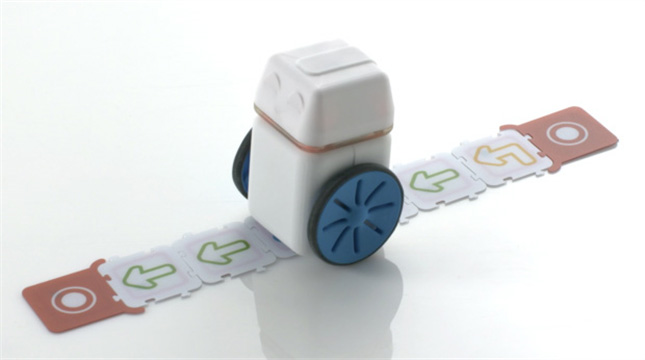 Kubo, a new educational robot that wants to teach kids about coding, has launched an Indiegogo campaign. Kubo, which was unveiled at CES 2017, can be pre-ordered by early backers starting at $170. Kubo will start shipping to backers in June 2017, and at press time had already raised $11,405 (38%) of its $30,000 goal. Kubo, which is designed for kids as young as three, wants to make programming “as simple as completing a jigsaw puzzle.” To do so, the company created the TagTile programming language that teaches programming concepts in a screen-free environment. The TagTile programming language consists of puzzle pieces that offer different directions for Kubo to follow. Users connect the puzzle pieces any way they want, and Kubo then drives along the tiles to read the directions. Kubo then acts out that sequence when it’s placed on the “play” tile. Watch the video below to see the process play out. Kids won’t be able to build Boston Dynamics ATLAS robot after playing with Kubo, but they will be introduced to programming concepts like loops, functions, routines, subroutines, and more.

“Our goal is to make kids creators, not consumers. For most children using computers and tablets, the devices are black boxes, working by some kind of magic,” says Tommy Otzen, CEO and co-founder of Kubo Robot. “And because many parents and teachers aren’t engineers, they don’t have the technical knowledge to teach their children how these devices work. KUBO makes it simple for anyone to teach the next generation the universal language of technology, code.”