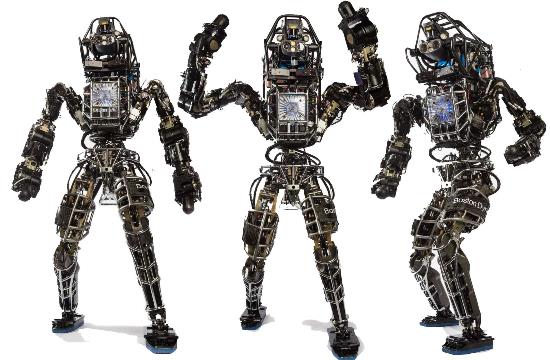 Atlas, a Titan from ancient Greek mythology, was tasked by Zeus to hold up the sky above Earth for eternity. Atlas, the bipedal robot from Massachusetts, is starting out a bit smaller, with a couple of ten-pound boxes in a warehouse. But it’s the way Atlas the robot picking up those boxes that’s so mind blowing. The robot you see walking, opening doors, and picking up boxes in the above video, is the latest iteration in the Atlas line of robots from the Alphabet-owned robotics company, Boston Dynamics. Alphabet is not only the parent company of Boston Dynamics, but also Nest, Verily, and that little ol’ search engine, Google—as well as all of Google’s offshoots. This latest Atlas model is significantly smaller than the previous generation, the former stands at 5’9″ and weighs 180 pounds, while the latter was 6’2″ and 345 pounds. This updated Atlas, again unlike his older, bigger brother, also doesn’t need tethers for support or power, as is evidenced by all of that awkward yet efficient frolicking in the snow.