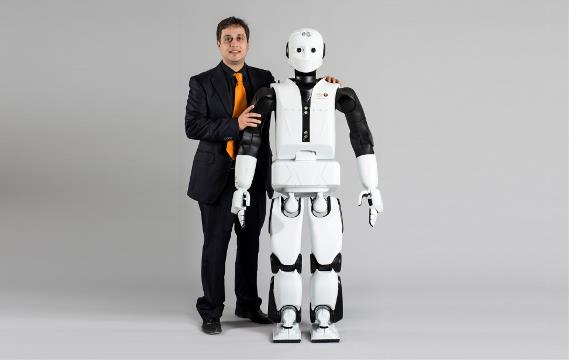 The United Arab Emirates, known for its lavish building projects like the Burj Khalifa, is also financing an equally ambitious robot project. PAL Robotics, based in Barcelona, Spain, was contracted to build a robot that could stand next to the likes of Honda's ASIMO. Now, after nearly a decade, the company has unveiled its third generation humanoid robot. Pal Robotics have released the REEM-A and REEM-B in the past although they were never mass produced or sold to the public. The latest REEM C however is available to purchase as a research platform. KAIST’s HUBO robots are already being sold to universities around the globe, costing hundred of thousands of dollars for a single unit. PAL Robotics say that REEM-C is an ideal tool to learn about robotics, including walking, navigation, body control and grasping. REEM-C is 5ft 4 inches tall and weighs in at 70kg. It can walk at 1ft per second, however it is reckoned this will improve with time. The design is modular and has two internal computers inside, along with stereo cameras, microphones and speakers. The robot has laser range finders on its feet as well.