It's a public, land-grant, research-intensive university with campuses and facilities throughout Pennsylvania. Founded in 1855, the university has a stated threefold mission of teaching, research, and public service. Its instructional mission includes undergraduate, graduate, professional and continuing education offered through resident instruction and online delivery. Its University Park campus, the flagship campus, lies within the Borough of State College and College Township. It has two law schools, Penn State Law, on the school's University Park campus, and Dickinson Law, located in Carlisle, 90 miles south of State College. The College of Medicine is located in Hershey. Penn State has another 19 commonwealth campuses and 5 special-mission campuses located across the state. Penn State has been labeled one of the "Public Ivies," a publicly funded university considered as providing a quality of education comparable to those of the Ivy League. Annual enrollment at the University Park campus totals more than 46,800 graduate and undergraduate students, making it one of the largest universities in the United States. It has the world's largest dues-paying alumni association. The university's total enrollment in 2015–16 was approximately 97,500 across its 24 campuses and online through its World Campus. The university offers more than 160 majors among all its campuses and administers $3.62 billion (as of June 30, 2016) in endowment and similar funds. The university's research expenditures totaled $836 million during the 2016 fiscal year. Annually, the university hosts the Penn State IFC/Panhellenic Dance Marathon (THON), which is the world's largest student-run philanthropy. This event is held at the Bryce Jordan Center on the University Park campus. In 2014, THON raised a program record of $13.3 million. The university's athletics teams compete in Division I of the NCAA and are collectively known as the Penn State Nittany Lions. They compete in the Big Ten Conference for most sports. 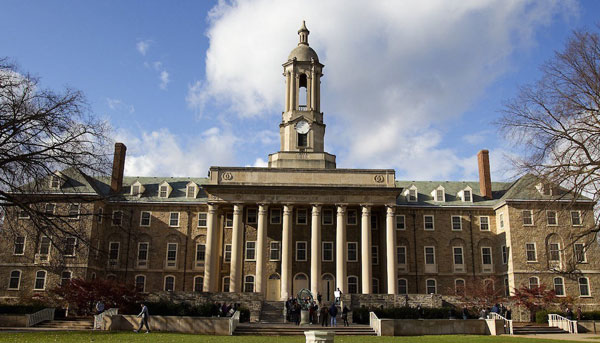