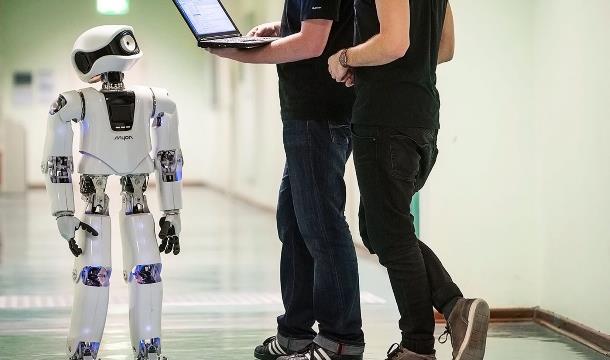 Robots designed to look and learn like children isn't a new concept. We've seen the iCub work it's way towards understanding visual cues and eye contact, and the Diego-san robot from UCSD and Kokoro was made for cognitive experiments (as well as terrifying everyone who sees it). Without seeing Myon tackle actual language tasks, it's hard to know how it stacks up to these other projects. However, Myon is part of the ambitious and rather successful Artificial Language Evolution on Autonomous Robots (ALEAR) project, which is a point in its favor. Where Myon seems to stand out is its hardware. It has 192 sensors, 48 joints, and a touchscreen on its chest. Most impressively it has a modular design structure so that it can function even after losing a major portion of its body. Myon was developed by the Lab of Neuro Robotics at Humboldt University in Germany, in collaboration with design firm Frackenpohl Poulheim. They hope that the modular design may help answer questions such as what happens when a learning robot swaps out a limb with an untrained sibling. It's shiny shell is made of makrolon, a polycarbonate product by Bayer Material Sciences. The external covering has structural importance - it provides support for torsion forces used in movement. Still, I'm not too impressed with the walking skills shown in the video below. It's not a bad bit of locomotion, but I've seen better from Lego bots.