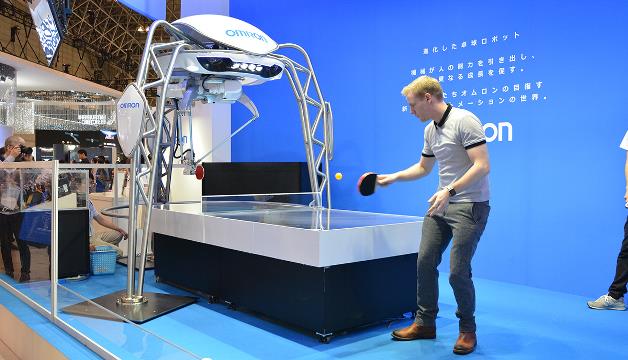 Japanese electronics firm Omron says that in the beginning, its ping-pong-playing robot “could not even return a ping-pong ball,” which suggests its engineers were getting ahead of themselves when they described it as a “ping-pong-playing robot.”  the company clearly isn’t afraid to tell us just how bad the robot really was, explaining how the machine “kept missing the ball … it couldn’t even return the ball to the opponent.” Evidently a tenacious bunch, Omron’s robotics engineers persevered, determined to create something that would at least go some way to justifying all the hours they were giving the project. So at last, there’s some good news to share. This week, several years after a team member batted the first ball toward their (then) hopeless machine, Omron has unveiled a third version – and it’s ready to play. To ensure it can make an accurate shot, the sensor-equipped bot analyzes not only the position of the ball, but also the opponent’s standing location and the precise position of their bat. Its computers then make a lightning-quick judgment about the likely trajectory and speed of the ball, allowing it to position its bat as the ball approaches before hitting it with the appropriate force back toward the human player.