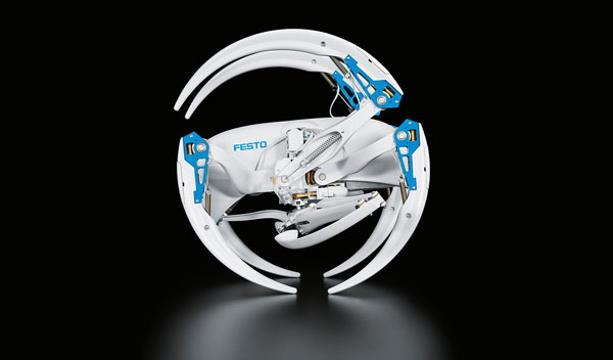 The biological model for the BionicWheelBot is the flic-flac spider (cebrennus rechenbergi). It lives in the Erg Chebbi desert on the edge of the Sahara. Professor Ingo Rechenberg, a bionics processor at the TU Berlin, discovered it there in 2008. The flic-flac spider can walk like other spiders. It can also propel itself into the air, however, with a combined sequence of somersaulting and rolling on the ground. the BionicWheelBot, inspired by the real-life flic-flac spider that’s known for doing cartwheels to quickly escape a predator, is equal parts technical marvel and terror for anyone who’s uneasy around creepy-crawlies. From a functional point of view, the robot’s ability to transform makes it ideal for tackling various types of terrain. When things get uneven, the BionicWheelBot can slowly tip-toe its way over rocks, debris, and other obstacles with its articulated legs. But when the path ahead is clear, it can convert into a wheel and use two of its legs to quickly propel itself along.